Our modern Masonic fraternity, with a recorded history going back more than 600 years, is directly descended from the operative stonemasons who built the great cathedrals in Europe during the middle ages.   Those huge, imposing, towering monuments, which men built to glorify God in Heaven, are to this day engineering and architectural wonders, rivaled only by steel-reinforced concrete structures of the twentieth century.  These cathedrals are far more than a testimony to man’s creative genius.   They are hymns to his faith in a Divine Being, Supreme Intelligence of the Universe, and the Supreme Architect of all Creation.

These early craftsmen combined incredible ingenuity, inspiration, guesswork, and brawn to create those magnificent monuments to man’s faith in God.  Freemasons today are still considered to be builders, however, but no longer of temporal structures using stone and mortar, but of moral and spiritual edifices, architects of men’s character.  Our modern fraternity has selected tools and implements of architecture as symbols that help imprint on the memory of our votaries wise and serious truths that are taught by ceremonies found in our stately rituals.  Those rituals, our heritage from the old Masonic craft guilds of the middle ages, are most venerated and contain nothing repugnant to the laws of God or man.  The teachings of our ritual uplift man, elevate his character, appeal to his intellect, and help him build that cathedral within his own heart, that inner spiritual temple of character, “THAT HOUSE NOT MADE WITH HANDS, ETERNAL IN THE HEAVENS.”

Let us heed the words of the poet, I. E.  Dickenga, who wrote: “We are building every day, in a good or evil way; and the structure as it grows, will our inmost self disclose.  Till in every arch and line, all our faults and failings shine; it may grow a castle grand, or a wreck upon the sand.  Do you ask what building this, which can show both pain and bliss that can be both dark and fair? Lo, its name is character.  Build it well, what’re you do; build it straight and strong and true; build it clean and high and broad; build it for the eye of God.”

We who are Master Masons are proud of the Masonic Heritage that has been handed down to us in this country by our Founding Fathers, the builders of our great nation.  Freemasonry has an illustrious history in this great land of ours.  Freemasonry actually helped preside over the formation of our republic and had much to do with its growth.  Men like George Washington, Benjamin Franklin, Paul Revere, John Hancock, Joseph Warren, John Paul Jones, the Marquee de Lafayette, Baron von Stuben, and others, all Master Masons, were present at the formation of our new nation.  Whenever men of the past felt the need to throw off the yoke of oppression, whether political, intellectual, or spiritual, and demanded their unalienable rights, they have found a true friend in the Masonic Fraternity.

Unless our craft were truly good and our calling honorable, we should not have lasted for so many centuries, nor should so many illustrious men in all ages have shown themselves ready to promote our interests.  We have had 15 Presidents who were Master Masons, two of whom were Grand Masters — Harry S Truman in Missouri and Andrew Jackson in Tennessee.  Also, 36 of our Supreme Court Justices over the past 219 years have served our craft — including the Prince Hall Mason Thurgood Marshall.  Two Chief Justices were Grand Masters — John Marshall and Earl Warren.  Millions of men from every period of our history and from every field of human endeavor have had their lives influenced by our gentle craft.  Astronauts, explorers, doctors, lawyers, educators, scientists, politicians, statesmen, generals, admirals, men of the cloth, businessmen, authors, laborers and labor leaders, musicians, sports heroes, movie stars, and many, many others have carried the proud title of Master Mason.  Millions of men from over 16 thousand lodges in the United States are dedicated to the same love of country, the same Brotherhood of Man under the Fatherhood of God, which has motivated Freemasons throughout our history.

Our fundamental teachings rest upon the most basic of all truths.  Every man, before he is allowed to participate in the rights and privileges of our fraternity, must profess his faith in God the Father Almighty, the Grand Architect and Master Builder of the Universe.  Freemasons share a common belief in the Brotherhood of Man under the Fatherhood of God.  They believe in the dignity and worth of the individual, in his God-ordained right to achieve his destiny through his own effort.  They are pledged to uphold the time-honored institutions of honesty, integrity, and forthrightness and are strong supporters of the fundamental principles of physical, intellectual, moral, political, and religious freedom for all our citizens.

“We are blind until we see
that in the human plan,
nothing is worth the making if
it does not make the man.
Why build these cities glorious
if man unbuilded goes?
In vain we build the work, unless
the builder also grows.”

Freemasonry may well be called the science of self-improvement.  Her plan is simple.  Begin with a man, just one man at a time, as good a man as possible, one that is respected in his community, lives according to the laws of the land.  Then Freemasonry shows that man, again and again, how he can become better — not better than his fellow man, but better than himself.  By making better men, we build a better community, a better nation, and a better world.

”Your task — to build a better world,” God said, and I answered, “how? The world is such a large, vast place, and so complicated now, and I so small and useless am, there is nothing I can do.” but God in all his wisdom said, “just build a better you.”

We have within Freemasonry the potential of becoming one of the strongest and most dynamic moral forces in the world today, but only to the extent that we continue to give of our time, our talents, and our treasures to our fellow man.  The great principles taught in our lodges must become part of the very fabric of our lives, so that by our very character and action, by what we do as a fraternity and as individuals thereof, we are examples of good citizenship and that we are men who refuse to compromise with those forces that today seek to destroy the church, the home, the school, the court, and even the great government of principles which protects our Brotherhood.

Out of all that I hear and see, day-by-day I am building me; I alone have the right to choose, what to reject and what to use.  Nobody’s workmanship but mine can keep the structure true and fine; strong or feeble – false or true – I build myself by the deeds I do.

Helpful Links for our members

Photo of the day 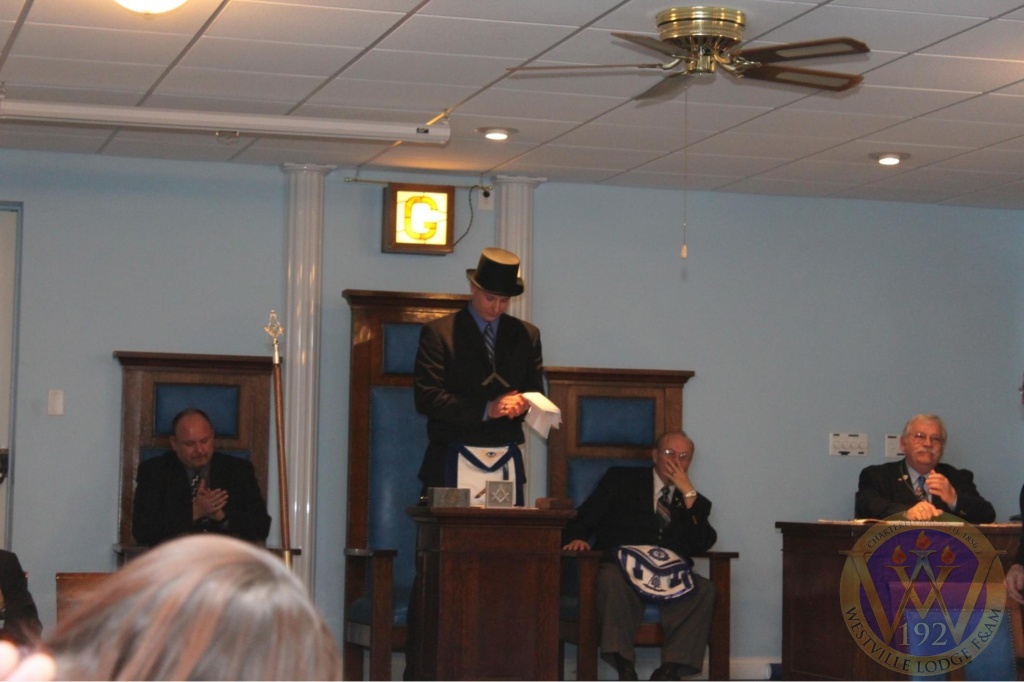